Can read audio CDs and other sources directly and save them in space-saving formats such as MP3 or Ogg Vorbis. 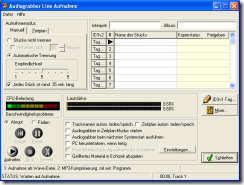 Audiograbber 1.83 SE is a program that is used to copy music from various sound carriers to the hard drive. Audio files can be imported directly and converted into space-saving formats such as MP3 and Ogg Vorbis!
In addition, old sound carriers such as cassettes or records can be played on the PC using the recording function. This reduces the risk of losing important recordings from the past!

Audiograbber 1.83 SE is a completely German version and available as freeware.
Because of the simple operation and nice interfaces, working with Audiograbber is easy and perfect for beginners!

Audiograbber is multilingual.
English, German, French, Spanish and Italian are available in the basic installation!
Other languages ​​can be downloaded.

To get high quality with Audiograbber MP3-To generate files, the Lame-MP3-Plugin must be installed. The plugin automatically configures Audiograbber with the recommended settings.
All parameters are entered fully automatically with the installation in Audiograbber.
It no longer has to be switched to "external encoder" or anything else.