After the advantages such as safe surfing with Sandboxie and the

Behavior of individual files has been explained in detail, should now be in the Part 2 will be discussed in more detail like yourself einzelne Program in a sandbox to install permit. That also counts Couching new Sandbox. With the help of many useful functions, all installation files and Registry entries track down a piece of software and use this knowledge in a targeted manner.

As a Example should the software here Free YouTube to MP3 Converter installed and run in a new sandbox. Then the Content as well as the Registry entries looked at the software.

Generally stand for it two Procedures to disposal:

1. The new software is listed via the existing Sandbox DefaultBox.

2. A new sandbox of its own is created for the software and installed and executed there.

In order to be able to explain another advantage of the sandbox at a later point in time, a new sandbox for the program created.

This is in the menu above Sandbox > Create a new sandbox possible. 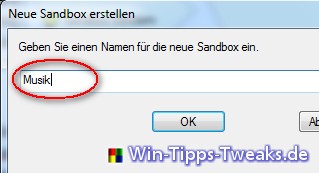 It must be a now appropriate name for the sandbox. This example was chosen for Music decided. The new sandbox is now created.

Install software in the sandbox

Once the new sandbox has been created, it is opened via a Right click the context menu this and choose the command Start in the sandbox > Windows Explorer start. 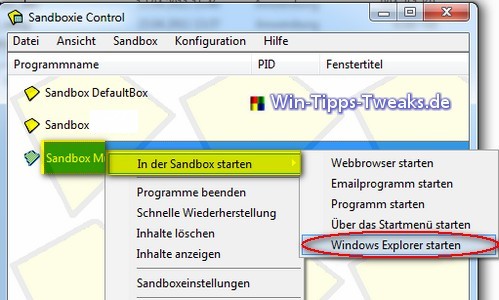 As a Distinguishing feature of the Windows Explorer of the sandbox, as in all other dialog windows, the Rhombuses in front of and behind the name.

In Explorer you can go to the Installation file navigate and execute them as usual and to install.

Once the installation is complete, go back to the sandbox and this time open via the context menu the order of commands Start in the sandbox > Start from the start menu.

A new menu opens automatically. Here you have to have the installed Programme now find and öffnen. In this case, it hides on the desktop the sandbox. 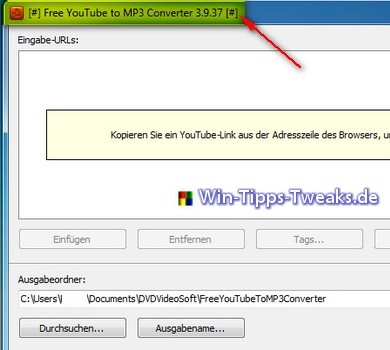 You have the program correct , you can see the two of them again Rhombuses. All music Files which you now download with the software end up in one folder, the just in der Sandbox exists. If the files are marked with fours, this does not affect the operating system.

Attention! With the freeware from Sandboxie, only one sandbox can be started at a time. For example, if you want to run the MP3 converter and the Internet browser in parallel, both programs must be installed in a sandbox.

Via the context menu of the respective sandbox, the View content. So if you only have one program installed on a sandbox, you can do exactly that localize all filesthat were installed or created by the program.

In a new window all Areas displayed in the amendments performed became. Behind Drive all hide driveswhich can then be viewed in detail. 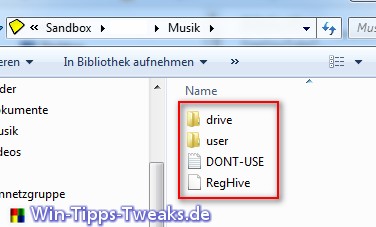 Most interesting for many, however, are those Registry entries. The file RegHive indicates this. With the knowledge of which registry entries a software creates or which of them remain after an deinstallation, certain software versions can be easily looked through. Trial versions could also be one of them. 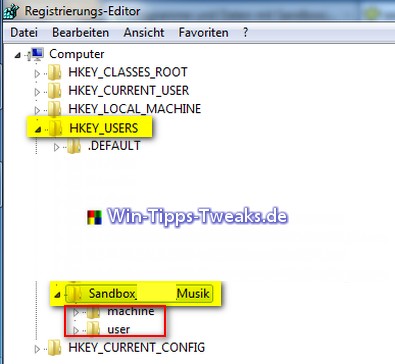 If you open the registry editor in the normal way via the Windows operating system, Windows key + R > regedit, navigate here to the following key:

HKEY_USERS \ Sandbox_Username_Name of the sandbox

Attention! In order to find this key, the respective sandbox must be active beforehand. So you have to start the program from the sandbox and then look at the registry.

An active sandbox is also terminated via the context menu > Programme end.

see also: Part 1- isolating programs and files with the sandbox