isolated environment to start in order to prevent possible damage to the operating system by unknown software or software. This is made possible by a small operating system of its own, as it were, which leaves no traces whatsoever after being uninstalled. Also the Windows registry remains due to installed applications or changes made in the sandbox, unaffected. So the tool is ideal for just getting started Try software or else safe on the internet to surf.

Im Part 1 of the article will be after first start Sandboxie took a closer look at the menu and its options. Besides, that will Behavior the Delete and Create Files analyzed from a sandbox.

First functions at a glance

Opens Sandboxie Control after the installation for the first time, you get next to the automatically created desktop icon -Sandboxed web browser- the following view: 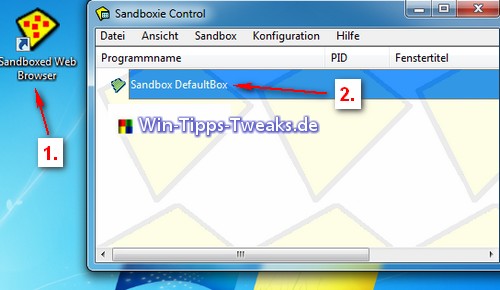 Will the shortcut Sandboxed web browser [1] double-clicked on the desktop, the currently used web browser opens from the sandbox. This means that a possible Four infestation etc. only has an effect on the sandbox and after deleting it, too residue eliminates is. So you surf safe on the internet.

Im Control window [2] you can find the existing one Sandbox DefaultBox. Via the menu Sandbox > Default Box > In of the Sandbox start > Windows Explore start, a first small impression is possible.

The will now open Windows Explorer from the Sandbox DefaultBox out. In what way this differs from the ″normal" Windows-Explore should distinguish the following Compare demonstrate: 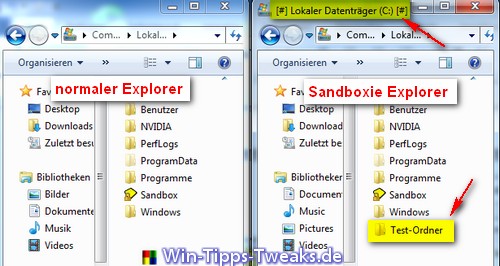 Here was Parallel also the normal one Windows Explorer open, and next to that Sandboxie Explorer positioned.

We note the following characteristics:

What can't a sandbox do?

Of course, the sandbox is a very effective way to protect yourself from the spread of fours from the internet. However, if a Trojan ″ only ″ intends to read data from the registry, this is just as possible from a sandbox as from the actual operating system. Data to be read out could be, for example, Windows license keys or sensitive data from online banking.